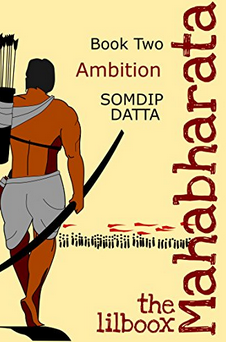 I
s there a new way to present the Mahabharata? A story as epic and grand as the Mahabharata has inspired the great and the devoted alike, and sadly the mediocre and agenda-driven also, in finding ever new canvases to paint the story on.

Just as Amruta Patil found a graphic palette on which to paint her interpretation of a part of the Mahabharata, Somdip has adopted the graphic route, but given it a digitl avatar. The result is nothing short of stunning.

Book Two, Ambition, is the second book in a series of five planned books. The first one was Seeds of War, while the remaining titles are Riches and Rags, Hide and Seek, the Civil War, and the Uncivil War.

This second book begins with the tutoring of the Kuru princes - the Pandavas and Kauravas. It starts out with the famous episode where Drona subtly drives home the point of focus being the determinant of success. This is the chapter titled, "The Royal Sons". The other chapters are "The Priest's Son" - on Ashwatthama, "The Hunter's Son" - on Eklavya, "The Driver's Son" - on Karna, "Mice in the Hole" - the Varnavata conspiracy and the Pandvas' escape into the forest, "The Rakshasi" - the killing of Hidimba and Bhima's marriage to Hidimbaa, "Ekachakra" - the Pandavas' stay where Bhima dispatches Bakasura, and "Kampilya" - where the Pandavas go to attend Droupadi's swayamvar. The book ends with Droupadi marrying all five Pandavas, and Duryodhana breaking the news to the Kuru king, Dhritarashtra.

The focus is on visuals to drive the story forward, as well as the mood. The words are sparingly used. There are pages where the story moves only via images. Words are not needed - as in the Eklavya episode. There is a crisp economy in the words, which takes the attention to the visuals. This is where Somdip's art moves to a different level altogether. The use of colors, the deliberate economy in the panels where needed, the angles, the lushness - everything seems to come together perfectly.

This is the kind of book that not only adults can enjoy, but can be read out to children. Children of almost all ages would find this an engaging and curiosity kindling. It is not possible to compress all the infinite subtleties of the text in a graphical rendering as this, but given the canvas Somdip has chosen, he has excelled.

I look forward to the third installment of Somdip's book. 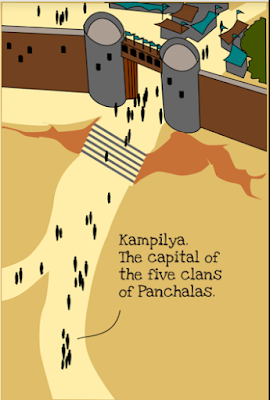 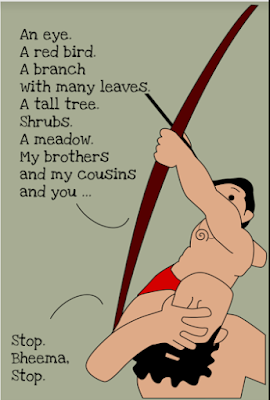